Users can use video cards from various manufacturers, so each miner can install any drivers for these cards. Let’s see how it works? Hiveon OS driver update.

Why should I update my drivers, and what does it do?

A driver update can bring mostly performance optimizations that may allow you to gain a few extra MH/s from your card. For new graphics cards, a driver update may be necessary for the card to be properly detected at all.

How often should I update my drivers?

If the worker is running stably, then you may not want to update the drivers at all. However, if you want to take advantage of new features, it's worth doing an update once every few months. In Hiveon OS you can update the whole system image to the latest stable version with the command hive-replace -l and forget about the drivers. This way, you will also gain access to new system features and update the kernel.

For NVIDIA cards, however, if the version of drivers included with the system is not suitable for you, you can also update the drivers themselves. This is done with the nvidia-driver-update command, which we will describe in more detail later in this article. Let’s see how Hiveon OS update nvidia drivers.

Things to keep in mind

To install the HiveOS updates of NVIDIA/AMD drivers, you need to use one of the following options

You should only perform AMD driver updates in conjunction with the Hiveon OS image update.

Starting from the version 0.5-70, we integrated a script into the operating system that makes it possible to install the most current and efficient NVIDIA drivers, which can be activated in two ways: using the Hiveon OS web interface or via an SSH connection: 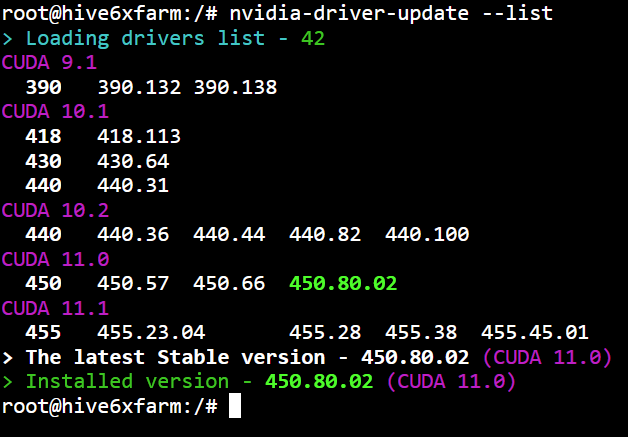 Here you can select the version you require from the available ones.

Or simply specify a series of drivers, and Hiveon OS will install the newest available version from this series: nvidia-driver-update 495

If necessary, you can write the full address at which the archive with the driver software is located: nvidia-driver-update https://download.hiveos.farm/drivers/NVIDIA-Linux-x86_64-495.46.run

You can find drivers in the Software Collection at: https://download.hiveos.farm/drivers/.

Sometimes, after the update, the overclocking settings may not work. To return the previous functionality, you just need to write the following command: apt install --reinstall -y nvidia-settings

You shouldn't have any issues here. In case of any error, you need to enter the command again - everything will work.

If it doesn't work at all and you get errors like "Unload modules failed" (or something similar), you can try to enable maintenance mode without loading drivers, reboot and repeat the update procedure. 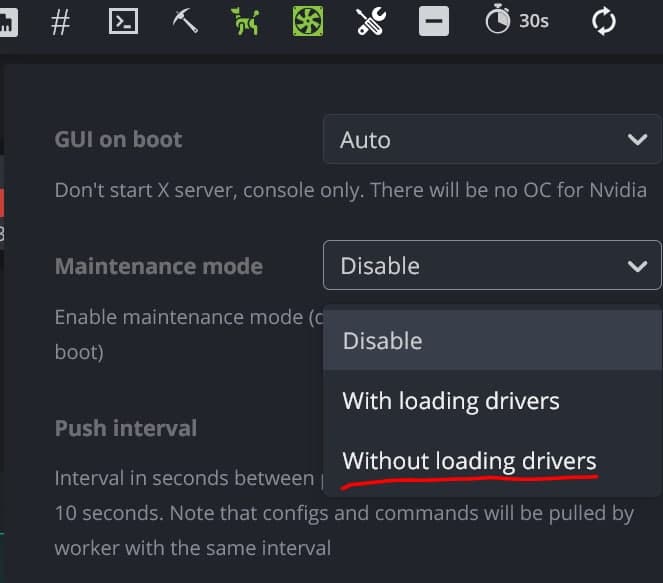 How to update AMD drivers in Hiveon OS?

Hiveon OS updates come with new versions of AMD drivers. You can update the AMD drivers by updating the image to the version you want. You can find detailed instructions here. We do not recommend performing a HiveOS AMD driver update independently.

How to update NVIDIA drivers in Hiveon OS?

What are video card drivers?

Video card driver is a software that enables your computer to communicate effectively with your graphics card. Therefore, they are very important in cryptocurrency mining. They enable the GPUs to be detected and used for cryptocurrency mining. In Hiveon OS, we include them in the system image, so you don't need to install them separately. The system also helps you update NVIDIA drivers separately with a simple, dedicated nvidia-driver-update command.