The card has been working flawlesly for the last three months. Recently hashrate dropped to 20MHs and power limit reached thresold set for 125W. Also Hive reported uncoverable memmory errors.
I lowered OC values but even with mem set to +1500Mhz did not work ( previously 2200Mhz was OK)
I moved the card under windows. I have noticed that core has only two states 210MHz (low hasrate) or 1950Mhz ( 200w power consumption). When I set in AB other values the card resets itself after a while to min or max core values depennding I guess on AB presets. I am using Lolminer and Hive system is up to date.
I inserted other GPU in the riser and it works fine so it is not riser related problem.
Any idea what might happen?

does it show a throttle reason if you run nvtool --throttle? have you tried with 0 memory OC?

And what happens if you lock the core with afterburner instead of the offset? If you’re able to test on hive let me know what the result of the above command is

This is what happens all the time the GPU crashes immediatelly under NiceHAsh Lolminer after start with settings on AB like this: Vram= - 200Mhz ( minus); Core= - 200MHz (minus); PL= 66.
I am not an expert but to me VRAM is damaged. 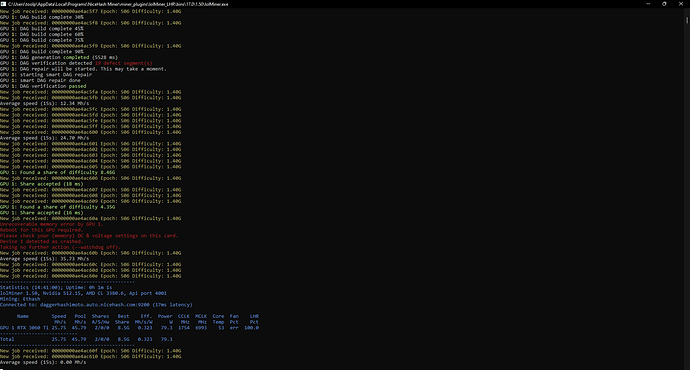