Hi, Post your OC settings for FLUX for various cards. I am doing Flux on Nvidia, ETH on AMD. I am on flux solo pool and getting a disconnect error for two days now. Anyone else?

I have two Nvidia 1650 GPUs, both mining Flux with the same overclock setting. They keep the same temperature around 60 degrees, but one of them (and always the same) always was working with the fans speed locked at 99%. As it was under warranty, it was replaced. But this new one also always works with fans at higher speed compared to other one. There are only these two cards in the rig and the connections are all the same way, risers are from the same manufacturer and version, powered by molex and the GPU powered by PCI-e. I’ve already changed the bus, riser, and power cables cards, but one of them and always the same one continues to work with the fans turning at a higher speed than the other, but not at 99%. Could it be something in the Hive OS, or in the miniZ miner that always chooses the same GPU to perform processes that demand more performance and consequently heat up more, forcing higher fan speeds to maintain the defined target temperature?
But, the GPU with the highest fan is often consuming less energy than the other. As the power consumption is directly proportional to the temperature rise, the GPU that consumes the most should have the fans spinning faster, but that’s not what happens.
Does anyone have any idea why this is?

Any stable template for a regular 2060??

I going to start looking for it in next week.

hi
can you say your gpu is lhr and your driver version?

Below are my stable setting for RTX 20 series cards. 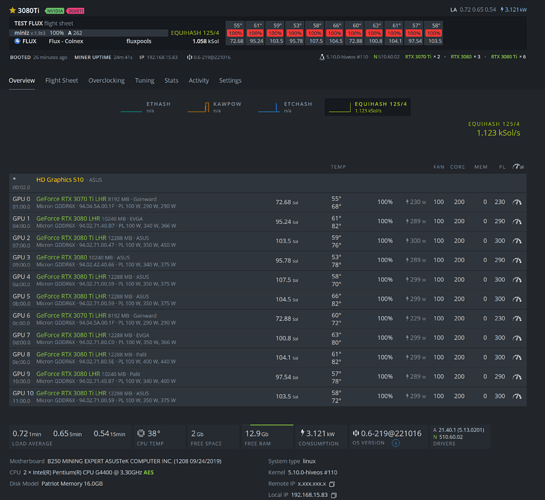