One of the most asked question for miners now is ‘What should I mine with my old 4Gb Cards?’ A lot of people have sold their old 4Gb cards to gamers or included with a computer. But there are a lot of 3Gb and 4Gb GPUs that still mine. Take a look at how many of them are today in Hiveon OS:

We have only shown cards with a percentage of more than 1%. So, we can say that 1 of each 6 GPUs in the Hiveon OS community is not able to mine the most mineable coin ETH, unless you have a specific hardware and software (more details will be provided later).

Normally miners use one of the several online calculators to pick a new coin to mine, probably the most known are:

It is important to know that these models can have 8Gb (AMD) and 6Gb (the 1060), so the calculators advise in red that this specific coin is only mineable with the 8Gb or 6Gb cards.

We can see that indication in the following images:

Now you know where to find out which are some of the most profitable coins.

It is easy to pick the big coins:

But are there all the most profitable coins? There are some combinations that are not calculated in these calculators and can make an interesting profit. Some of these combinations are:

The Ergo platform aims to provide an efficient, secure, and easy way to implement financial contracts that will be useful and survivable in the long term. Ergo describes itself as a self-amendable protocol that reportedly allows it to absorb new ideas and improve itself in a decentralized manner. The best miners for AMD are SRBMiner, nanominer. For Nvidia these two miners also work and we have a third option with Nbminer. If we pick for example an RX570 making 60Mh/s with ERGO, this means $1.57 per day with the same Watts consumption that we had before in ETH. If we compare that with RVN pushing the RX570 to the limit of 12-13Mh/s with an important increase of Watts that will be $1.46. So we are talking about an 8% increase in income. We are not considering the electricity cost that will also affect the RVN solution. At same Watts consumption the income of RVN will be lower. 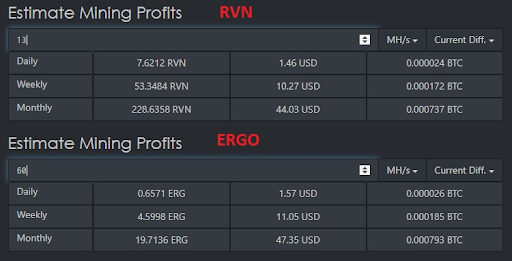 We have made the calculation in the herominers.com pool that supports both coins.

ETC is an old fork of Ethereum well known in the miner community, and Zilliqa (ZIL) is a token developed in the year 2017. Zilliqa is mainly based on the concept of Sharding and primarily aims at improving the scalability of the cryptocurrency networks as in case of Bitcoin or Ethereum. The white paper mentions that the transaction speed would be approximately a thousand times more than that of Ethereum network. Zilliqa is fast, secured and decentralized. Zilliqa’s high throughput means that you can focus on developing your ideas without worrying about network congestion, high transaction fees or security which are the key issues with legacy blockchain platforms. ZIL is mined each 90 minutes during a total of 2minutes. So that means each day ZIL is mined 16 times, during a total of 32min. Now there are 5 pools able to mine ZIL. This combination is another good solution to continue with the same OC that we have in our GPUs with ETH and have good profit, like the RVN profit.

About the miners, nearly all can mine ETC + ZIL, normally you should have to add a parameter to have a better improvement in the swap from ETC to ZIL. Probably in this case the best for this dual mining is lolMiner due to its dual connection, so you can mine in Hiveon OS ETC pool with the PPS+ and the Fee 0%, and mine ZIL in one of the five ZIL pools. This solution is always better than using the proxy provided by the ZILs pools, because using the proxy can increase the numbers of stales and reduce the benefit in ETC. With RX 570, this combination will give us 0.95$ in ETC + $0.47 in ZIL, so we are around $1.42 having the same Watts that we had with ETH. In the calculations we have considered a little less Mh/s for the swap between coins. That $1.42 is nearly the same as $1.46$ of RVN with a lot less stress in the GPU. Planning your future benefits, also consider the ZIL increase during the recent months. 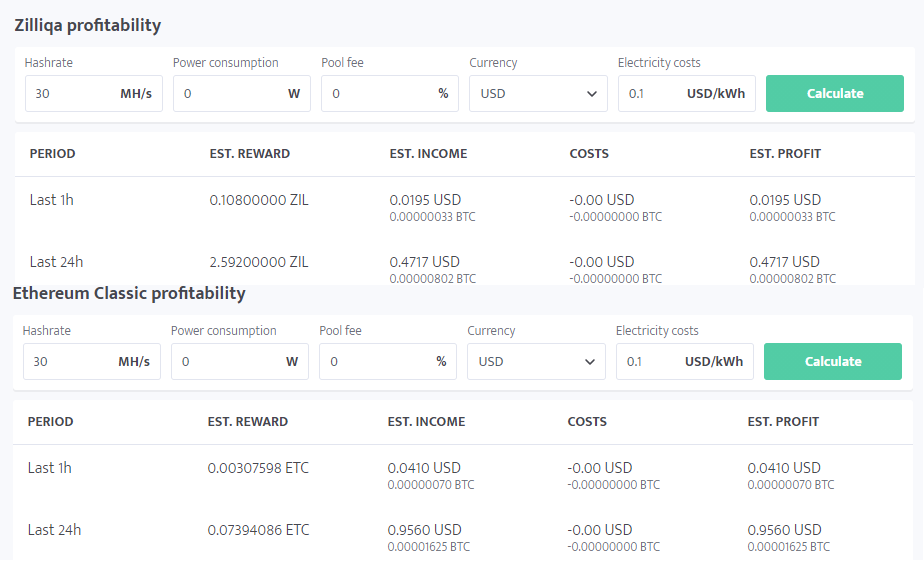 As we said at the beginning, we can still mine ETH. That’s true and we can have more than 20Mh/s with our RX 570 4Gb in ETH, with a profit of $1.66. But we have to consider several points for this situation.

This solution has specific limitations, and is limited in time, but it could be something to consider if we have 4Gb cards and several rigs where we can put them in the motherboard. Also with this solution we can continue mining ETH on the Hiveon pool with a fee 0%, and the PPS+ system (you will get paid for each valid share, which will make your income more stable). We always should pay attention to the fee of the pool and the payout commission (in the case of Hiveon, it is covered by the pool).

As you see, we have 4 more options to consider that the most known calculators do not have: ERGO, ETC + ZIL, ERGO + ZIL and ETH Zombie Mode. They make the same or better profit than RVN and with less Watts. We have shown two dual mining options — in the next articles we will tell how to configure them step by step.

Another interesting solution is to use multipools such as Zpool, Zergpool and others. They offer a larger list of algorithms and, accordingly, coins for mining, including those ones that are suitable for mining on 3-4GB cards. On these pools it is possible to mine both a certain coin and receive a reward in it, and receive payment directly in BTC, ETH, ETC, DASH, LTC (the pool automatically sells your coins on exchanges at the current rate). On the one hand, there is always something to mine. On the other hand, this option has its own nuances beyond the scope of this article.